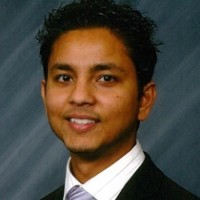 Dr. Ketul Patel was born in Gujarat, India. At the age of ten, Dr. Patel moved to Florida with his family. He attended the University of Florida where he was enrolled in the premedical sciences and also completed a Bachelor of Science in Business Administration. He then entered the School of Medicine at the American University of the Carribean, from which he received his Doctorate in Medicine. As part of a study abroad program, he traveled and studied in England for one year during his medical training. Dr. Patel completed his Internal Medicine residency and Gastroenterology and Hepatology fellowship in Southfield, Mich. During his fellowship training he was appointed Chief Resident and was elected President of the House Staff Association. Upon completing his fellowship, he joined Borland-Groover Clinic in August 2012.

Dr. Patel comes from a strong Indian/American background where caring, compassion and family values are paramount. He brings these same values to his practice as he cares for patients with kindness, a sense of optimism and humility.

In his spare time he enjoys coaching little league soccer, spending time with his family, and volunteering at a community health clinic. Dr. Patel lives and promotes an active lifestyle by playing sports, running, working out and being frustrated at learning to play golf.